I have always loved potato leek soup and as usual- I wanted to attempt a healthier version. I started with a small bath since I was not certain how it would turn out, but I will definitely make a larger batch next time!

Start with the cauliflower by chopping it into chunks (remove the leafy green part) and put into a large pot with the quart of vegetable broth. Depending on the size of your pot, you may want to add a cup or two of water. Bring to a light boil.

Clean your leeks and cut off the dark green portion. Finely chop the leeks and add to a pan with the butter. Keep on low heat and gently cook- be careful to not crisp up the leeks. This will take about 30 minutes.

I used a traditional blender for the next part, but you may use a food processor as well. I had not yet refined the liquid ingredient amounts so an immersion blender was not ideal. Slowly, scoop 1/3 of the cauliflower (which has been cooking this entire time) into the blender and blend until smooth adding a half cup of broth as needed. This consistency should be a thick and creamy soup. Repeat until all the cauliflower is in the blender.

Add the leeks and blend again. Mix in the buttermilk and salt and pepper to taste. (I did salt and pepper the cauliflower and leeks separately while they cooked). I had about 2-3 tablespoons of a creamy goat cheese from the previous day, so I went ahead and added this as well. Move the mixture back to the pot used for the cauliflower (after emptying any leftover broth) and keep on low heat. 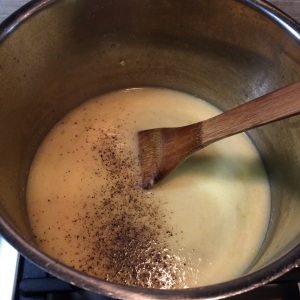 Pan fry the bacon and serve! I made an avocado chicken salad to pair with the soup. Delish!